Black and Blue: A Bruised Generation

I heard a story about a dog that was hit by a car shortly after giving birth to a healthy litter of puppies. Her hind legs were paralyzed after the accident, and although her pups had never seen a scratch in their short lifetime, they all pulled themselves around the house on their front legs dragging their hind legs behind them like their mom.

It’s natural for us to pattern our parents. When they walk with a limp, we adopt their hobbling habits assuming we’re doing the right thing. Today, I see our youth limping in their attempts to echo the courage of the former generations that were bruised in the fight to end police brutality.

As this generation is coming to age, they’re developing their pattern of faith after their leaders. The way they address social and spiritual issues can cause them to limp or leap. Leaders leave a mark when they turn a blind eye to wrongdoing. The greatest imprint is made when leaders model faith.

In Acts 12, the Church incurred a devastating blow as James, the brother of John, was killed with the sword. When King Herod heard the applause of the people, he proceeded to arrest the Apostle Peter as well. The Church had a decision to make in that moment as they faced the cruelty and injustice of a corrupt system. In response to the hatred, they did not storm the streets in riotous protests. Instead, they stormed the heavens in radical prayer. While the Church was praying, an angel was breaking Peter out of prison. Under the same persecution, James was killed, and Peter was delivered. The game-changer in the two realities was the earnest prayer of the Church (Acts 12:5). They were bruised but they assumed the battle posture of intercession with unwavering faith and it worked!

As we approach the hurting communities we’re called to, we can take a cue from the fathers of the early Church. In those days, they tended to the bruises of the Body of Christ by going back to God and putting Him in remembrance of His own Word. They understood that they couldn’t trust a corrupt government to uphold a righteous law, so they pleaded their case in the highest court until divine legislation was enforced.  Prayer is law enforcement. It puts a faith demand on the promises of God’s Word until supernatural power takes the form of practical solutions in our communities.

The early disciples trusted the Holy Spirit to guide their social action. Today, young people are downloading their opinions from social media and rallying behind anything that makes noise.

Like the church in Acts 12, our communities have suffered many bruises. We’ve witnessed black youth hunted down while jogging and shot to death while sleeping in their homes. We’ve learned that even obeying police orders can cost us our lives. This blatant, police brutality, lack of accountability, and abuse of power destroys the confidence in our urban community’s in law enforcement. Justice at best has been nothing more than a slap in a black face and a pop on a blue wrist. This is the gas that agitates the flames retaliation. 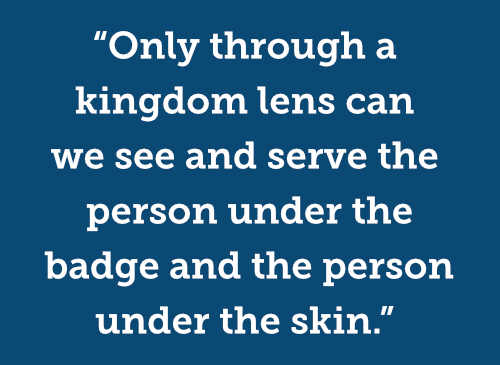 Dr. Martin Luther King said, “Riots are the language of the unheard.” He condemned riotous behavior calling it counterproductive while expressing empathy for an angry, muted people. Dr. King’s efforts contributed to change in the laws of the land, but only God can change the laws that govern man’s heart. Laws don’t heal bruises.

Bruises can be caused by severe external impact or, in some cases, by serious internal diseases. Unfortunately, a divided USA will suffer from both, and our youth are inheriting those wounds.erefore, Therefore, kingdom leadership is vital. Only through a kingdom lens we can see and serve the person under the badge and the person under the skin.

I believe the Lord is looking for urban ambassadors who he can trust with balanced influence—people who will cash in their “blackness” and their titles at the cross to take up the cause of the Kingdom. We cannot be effective youth leaders in urban communities if we’re imparting a heart of bitterness to the next generation. We’ve come to a boiling point of offense where many black leaders are so blue that they’d prefer retaliation over reconciliation. They preach the gospel of the bruised but forget that mercy only flows through the blood. Do we want the change we call for, or do we just want to be mad?

This generation needs leaders like Paul, who was tough enough to call corrupt leaders “white-washed tombs” but sensitive enough to lead a discouraged centurion to Christ and tell him, “Don’t harm yourself.” This is the ministry of our time. Young people need to see God’s masterplan playing out even through oppressive situations.

Paul and Silas praised their chains off and the cell doors open but saw the open doors as an opportunity of ministry rather than a jailbreak. If we will heal the bruises of our past trauma, we’ll see the broken hearts behind the badges and find that we hold the power of transformation in our streets.

Salvation is not in the government or police reform. It’s in God. If you throw our hands up, let it be in surrender to God’s truth. Like young Rhoda in Acts 12, she heard Peter—the answered prayer—knocking at the door but looked to the leaders to open it up. The Lord is charging student ministry leaders to open the door so the kingdom of God can come in and the highest authority can rule and restore all things. Change starts when the Church answers the door.

Jon Coker (San Antonio 2018) is the Student Ministries Director at Christian World Worship Center in San Antonio, Texas. He is also a multimedia journalist and digital reporter for KENS-5, a public speaker, and a contributing writer. jcoker34@gmail.com