It was not easy to exercise all social distancing protocols because DVULI alumni were all thrilled to see each other, and attendees of this year's CCDA conference were overjoyed, if not relieved, to be in the same room. 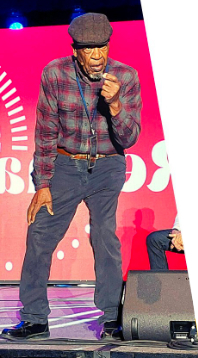 Even 91-year-old Dr. John Perkins couldn't stay away from the convening that attracted some 1,800 registrants.

A special highlight was emcee Eric Iverson (Twin Cities 2018), who skillfully managed the flow of the main stage attractions that included worshippers, dancers, panelists, speakers, video reels, and more. Each morning, Dr. Perkins offered five minutes of wisdom at the Bible studies, and he was a big cheerleader throughout the four-day conference. The reimagine theme was intended to be a call to realign with God's vision and to care for the vulnerable and oppressed like never before.

With many familiar (masked) faces and just as many first-time CCDA delegates, the conference atmosphere was refreshing, and it was easy to tell that those in attendance were grateful for it.

Members of the DVULI staff were honored to speak with the new CCDA President and CEO, Cecilia Williams, about future partnership opportunities and how urban youth workers can experience more training benefits. Hopefully, that will lead to even bigger smiles at the door!