In what could be recorded as one of the toughest years in history to be a police officer, on November 6, 2020, Wesley Reyes (Cleveland 2013) graduated from the Cleveland Police Academy. He soon took to the streets to protect and serve citizens in the community where he's resided since first grade.

For most of his adult life, Wesley has overseen the youth ministry at Iglesia Nueva Vida (New Life Church) Cleveland where he preached his first sermon at age nine, and where his father is the senior pastor. Coordinating youth activities, concerts, bible studies, prayer groups, recreation events, and more were some of his weekly ministry responsibilities.

As a product of a Christian home growing up on the west side of Cleveland, Ohio, Wesley had the typical childhood aspirations for major league baseball, the motion picture industry, as well as law enforcement. Yet, there was no way this preacher's kid could escape what his parents instilled in him about pursuing "God's plan for your life."

"I have always had a passion for youth," says Wesley. "But I knew my calling would involve being out with people, traveling and evangelizing."

Wesley was in his early twenties when he assumed the youth pastor role under his dad's leadership. He frequently preached to youth and, at times, adults. This opened doors for him to speak at other churches locally and across the nation. These engagements worked well for Wesley who admits he never liked feeling restricted to doing ministry within the four walls of a church.

Although wearing a badge and blue uniform wasn't exactly how Wesley envisioned taking the gospel to the streets, this new dimension of fulfilling God's call has offered more real-life ministry than pulpits or prayer meetings ever has.

"Ninety-five percent of the time you're going to a shots-fired, to a drug overdose, to a domestic violence scene, or to scenarios and situations where children are hurt," describes Wesley. ''This work is more spiritual than it is emotional or physical.” 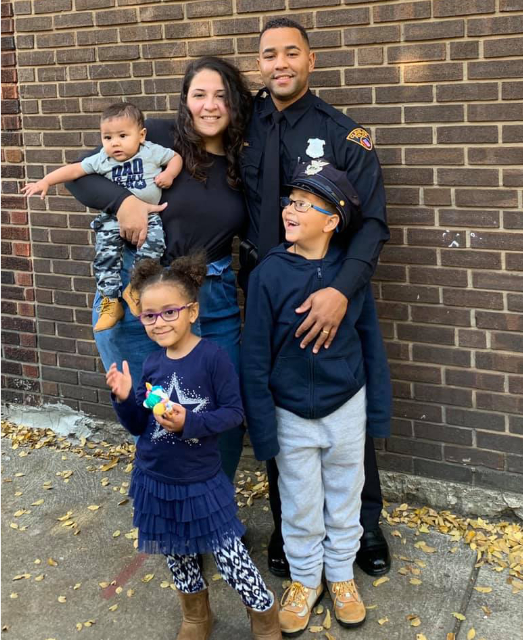 According to Wesley, the responses to calls for help as a police officer mirrors urban youth ministry in his eyes.

In a few short months on patrol, he's rescued abandoned minors off the streets, counseled youth on the brink of suicide, and spent several hours preventing young people from harming their mates or partners." When I look into their eyes, they are not bad people - they're just making bad decisions," reasons Wesley, who has a wife and three children (ages seven and younger) at home. ''You see so much evil out there [that] you can start to question everything as you hear people questioning 'where was God?"'

In this role as an officer, the DVULI core value of balance resonates with Wesley as he has found that there are several routine disciplines required of him each day. Some of these include keeping a healthy diet, daily workouts at the gym, staying spiritually astute through bible devotion and prayer.

“When I am at the district getting dressed for work, I always listen to sermons or worship music in the locker room,” he notes. “You’ve got to be more consistent with your disciplines because in this position, and as one who carries firearms you have to be ready for anything.”

Wesley continues to preach at his church and provides general youth ministry leadership. He points out that some of his learning as a participant in DVULI has afforded him the freedom to do ministry as a Cleveland police officer and urban youth pastor.

In the pages of Wesley’s DVULI breakthrough plan he considers not only the personal disciplines God expects of him but also reveals the importance of how his ministry methods should undergo a shift.

In 2013, he wrote, “As I’ve continued through DVULI, God just kept opening my eyes and tugging at my heart on the importance and reality of my choices and actions…to form a way of life that would help me overcome and breakthrough to fulfilling my purpose. I needed to change my approach and develop those plans.”

Referencing the “Strategy, Capacity, Relationship” curriculum principles, Wesley goes on to add, “This allowed me to be more open to new relationships outside of the church and build them…It also led me to interdependence and letting go of my pride and giving others the opportunity to help and to lead.”

There have been days Wesley admits he’s wondered if being an officer is the plan of God for his life that his parents taught him about. He says he has no regrets and loves what the work requires of him.

“I love direct connection with people in the community, helping those who need help and having interaction with those who have no one,” reflects Wesley, who also serves as chaplain for the Cleveland Indians minor league team. “I also like being there to interpret for those in need who speak Spanish.”

Despite the negative perceptions some police are confronted with around nation, Wesley says his choice to step into this position is a breakthrough chapter in his life. He acknowledges there are times when the press doesn’t report an entire story which may contribute to parts of the negativity. But he contends he’s grateful for the opportunity to be “the servant that people can confide in.”