Mike Davis (Kansas City 2008) had it going on in his hometown of Kansas City. Mike was an influential, upcoming youth leader who was in demand as a local motivational speaker, teacher, musical artist, dancer, and actor. His trajectory looked impressive with ministry invitations expanding beyond his city to other regions.

But like many charismatic leaders, Mike was a solo act. Going hard and fast as a youth minister with several proverbial plates spinning in the air, he needed something or someone to intervene to keep one or more of those plates from a crash landing.

“Before I was selected as a DVULI participant, I had no idea what to do with the call on my life,” Mike admits. “The only direction I had was how to continue building upon the gifts and tools I was given for ministry. In short, I was just doing.”

What kept Mike from having clear direction wasn’t belief in his own press as much as it was his lack of awareness that a key to ministry success required allowing others to join in with him.

It was the DVULI core value of interdependence presented at the first national conference in Orlando, Florida, that left a deep impression on him.

“The idea of leaning on others as a way of doing ministry was an [unexplored] concept for me,” Mike reflects. “And the fact that the success of your work and ministry is dependent on the involvement of others can be humbling.”

Mike goes on to explain, “Interdependence brought about breakthrough for me very early on in ministry because it showed me how important collaboration was and that I did not have to do it myself. Interdependence also showed me that individuals and organizations truly desired to help and be a part of what God was calling me to.”

The learning and goal setting, however, didn’t end with partnering. Another takeaway for Mike was the DVULI breakthrough skill called “community asset mapping,” which is offered in the second local workshop. This helped him recognize that he was not alone in ministry but that his urban community was very rich with resources. 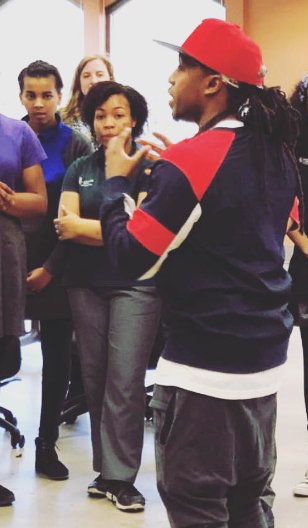 “Learning about community asset mapping and recognizing the resources that were in my own backyard was very eye-opening for me,” Mike points out. “Similar to interdependence, collaborating with the community showed me how important it is to know and honor those who are already here doing the work as well as being intentional about how we collaborate.”

Since graduating from DVULI, Mike’s capacity as a youth minister has grown while shepherding and empowering others to join his cause. The shift from me to we provided more room in his schedule and headspace to address how to best manage home and ministry life.

“Seeing the results as a DVULI grad is liberating,” offers Mike. “While you are in the midst of the training, you feel overwhelmed, burdened, and like there is no way you can retain all of the info given or retrain your heart and mind to become this leader that the program desires.”

He continues, “When you trust the process and take the journey, everything seems to work itself out. All of the training and workshops begin to show up in different areas of life and ministry as you keep moving forward, which is very liberating to me. Knowing that I have received the tools needed to be effective at what God has called me to is super encouraging and motivating.”

Currently, Mike is the Ministry Director at Seattle's Youth for Christ. YFC has given him the latitude to redefine how youth ministry is delivered in urban neighborhoods through a youth program he founded and named Cultured. Cultured is an arts-based outreach program under the banner of Seattle's YFC that uses the visual, creative, and performing arts to reach local youth and families. Their mission is to cultivate creative spaces for youth to encounter opportunity, community, and the presence of God.

Cultured has served Seattle’s youth since 2017, and Mike states, "Because of the direct involvement of local churches like Emerald City Bible Fellowship (a Covenant church in south Seattle), Cultured has become a consistent presence for youth to depend on throughout the Seattle area. If it were not for partnerships with the local church, the success of Cultured would not be possible.”

Cultured also partners with Young Life, Urban Impact, Community Passageways, and others. He hopes that one day the Cultured model can be replicated in other US cities.

Want to partner, connect, or just chop it up with Mike Davis? Ping him at https://www.facebook.com/MikeDavis39E/ or follow him on https://www.instagram.com/_red.culture_/ or log on at redeemedculture.org.