Living on the northwest side of Indianapolis in one of the highest violent crime zip codes in the city, Brian Walls (Indianapolis 2007) and his wife, Tiffany, enter year 20 at Tear Down the Walls Ministries.

With 13,000 people experiencing homelessness at least one night a year and 3,000 on any given night, they have dedicated their calling to homeless street outreach, intervention, and prevention. Brian originally launched his 90 percent volunteer-run organization to serve the homeless, but it was when he worked with teenage volunteers that his eyes opened to the power and significance of youth support. He'd not considered this component before, and his heart stirred. "I realized how much I truly loved working with youth!" explains Brian of the early days in ministry.

He relentlessly poured himself into his ministry and the young men and women he led. He was always gone–every day and every night. His well-intended yet zealous ways resulted in work, and home-life imbalance and personal relationships suffered. He was unknowingly neglecting his son at home. 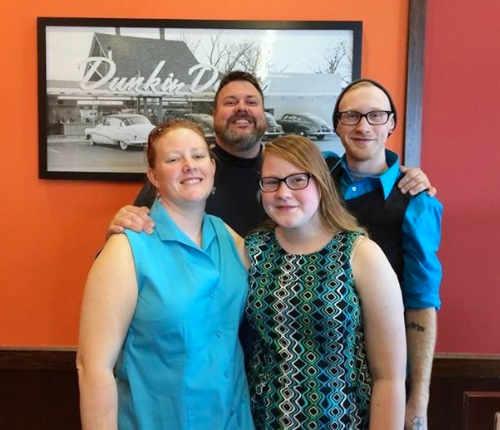 "I wasn't a good father back then," admits Brian. "That's largely due to my lack of being as present as I should have been as a father in my son's life when he was younger. I was always working, and when I wasn't working, I was exhausted."

Brian was still blinded by his hunger to grow his ministry. He added more to his plate by heading back to school. He made this choice because "I thought I had to do everything in my ministry, and I needed to be in charge of it all," divulges Brian of his young self. God worked that choice for the good when his college professor (a DVULI alum) told him about DVULI. He was selected to participate in the professional development of DVULI, which introduced him to the concept of empowerment, and that was exactly what he needed to address the imbalance of family life and ministry.

Brian knew he was where the Lord wanted him to be. "I learned I wasn't equipping and empowering others. I wasn't good at looking for and discovering skills, gifts, and talents God had given other individuals," explains Brian. "If they did it differently than me, then I was more apt to think what they were doing was wrong." Through the DVULI process, his posture as a leader began to shift from being a delegator to that of a learner and coach. "DVULI helped me recognize that I learned from the kids I led. They showed me they could thrive if I gave up the reigns and instead encouraged and often pushed them to lead," explains Brian of the power shift.

This new mindset made him wonder how many good leaders he lost early on in ministry. Searching for gifting in individuals and among his team is part of his new leadership process. He ponders, "What do they do well? How can I encourage them to pursue and use their giftings? What are their weaknesses, and how can I help them grow? If they're in a leadership role, I determine if I should come alongside and help carry the load or provide training, equipping, or more empowerment to help them to improve. Is someone else on the team better equipped for the role? Sometimes it's saying, 'You can lead. You don't need me. You can do this without me.'"

Once empowerment took hold, Brian felt almost "lazy" in his shift from doer to guide and coach. He had to figure out his new groove. "I still like being a part of it, and if I'm not, I feel like I'm not doing enough," he says. "I've always felt that way. And so, it's something I battle inside myself. It's okay to let them lead."

Brian and his youth leaders helped bring Groundworks to their neighborhood. Groundworks is an international nonprofit organization that teaches students about environmental issues impacting communities and ways to improve neighborhoods while getting paid to plan and implement community development projects.

He adapted his ministry's strategic plan to reflect youth involvement, now an integral facet of his community outreach. Brian and Tiffany added internship programs for high school and college students and began putting students in charge of student programming. "With guidance and instruction based on the DVULI core values, the youth began leading in our community," shares Brian. "They became part of the team planning and leading community outreach events, VBS programs, after school programs, and community development projects."

Finding balance by empowering his teens led to the breakthrough he needed at home. "It's better with my son now," says Brian, who became a devoted grandfather after the birth of his son's daughter. "We still have our rough patches, but I have a better relationship with my son now than I have had in years." Even with his daughter Cameron, Brian says, "Things are definitely better. As a family man, it’s been amazing because I love being a grandfather."

"I'm now aware that I need to constantly examine myself to remain balanced," says Brian. "I lost time with my family early on in ministry. I can't get that time back with my kids now. I can't go back and change that stuff, but I'm glad DVULI helped me to recognize it so I could start making changes."