► Ana Jara Sees the Possibilities of Reconciliation in Her Own Backyard

Ana Jara (Los Angeles 2010) was out of town when she received the text, “Turn on the news, NOW!” She flipped on the TV and was shocked to see rioting in her hometown of Santa Monica, California. Ana saw officers in full riot gear standing off against angry activists whose protest of police brutality against minorities morphed into destruction, looting, and chaos.

The riots of 2020 erupted in the very citywhere she was raised and has worked as aYouth and Family Services Support Coordinator for the Santa Monica Police Department (SMPD) since 2015. Ana brokedown in tears, “Everything I have workedon for the past five years is down the drain!”

Traveling back to LA, she felt broken and defeated. Not long after, Ana took a phone call from her direct report who said, “The officers are really struggling. We need your help. What can we do?” Ana hunkered down and reflected on how God had been using her in this unique position, which has helped create an understanding between law enforcement and youth in the community. Both the SMPD and Ana knew that resuming her Juvenile Diversion Program (JDP) work was exactly what Santa Monica needed in this critical season of reconciliation. When Ana started her youth services job at the police department more than five years ago, she sat down with the officers. She learned the system didn’t have any referral services in place for first- or second-time youth offenders. The officers could not mandate any type of counseling for youth—there weren’t even pamphlets of supportive services to leave behind. “I have nothing for them,” explained an officer. “Based on the limitations of what my badge can legally allow me to do, the best I can do is go out, find them, and bring them back home.” She found that officers and this department wanted to help intervene but didn’t know how. Their tools were all enforcement and no long-term support. Ana knew there was a “safety net of youth programs and supportive services in the city,” so she devised a plan to connect officers with these helpful resources and then follow up with youth. 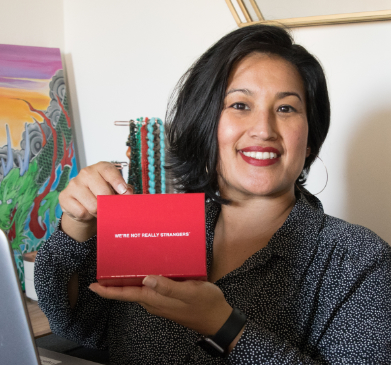 JUVENILE DIVERSION PROGRAM
With the full support of her chief and department, Ana developed an atypical “services first model,” which means once a juvenile gets arrested and is referred to her, individualized services commence. It begins with making assessments, and then a plan that includes diversion classes and community service hours is devised. An intern (an MSW candidate) manages each case, and when appropriate, additional services such as counseling, anger management training, school support, or group services are provided.

To date, 130 youth have been referred to the JDP from the SMPD. There are six young people on the current caseload (COVID-19 stalled the process), and 97 have already graduated. The program boasts an 87 percent completion rate.

OFFICERS - The Police Cadre
Ana convenes a group of 12 officers that meet bimonthly for training. The topics of the sessions include adolescent brain development, trauma-informed care, restorative justice, communication with teens, and engagement practices/approaches. These sessions are supplemented with opportunities to connect via weekly dialogs or one-on-one discussions with local youth over a meal.

SCHOOLS - Youth Prevention
Throughout the year, the SMPD conducts prevention courses at the local schools in leadership groups or government classes. Experiences like mock traffic stops, where youth and officers reverse roles, are eyeopening for both parties and help create empathy and connection. Many officers shared stories about how impactful building rapport in class is and how it translates out in the field. Youth admitted to never realizing how anxious officers are when approaching cars. This healthy interaction provides an invaluable experience from which students can draw at least one positive interaction with officers.

“One of the most powerful things I’ve seen is to have officers in the room,” notes Ana. “It helps officers to humanize and gives them a full picture of what a young person is going through.” 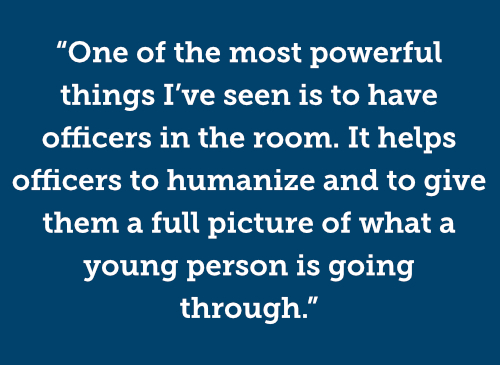 When parents saw what the police department was doing for their children, they asked for similar help: “As an elementary school parent, there’s a lot of different things that they give us, but once our kids become teenagers, these crazy little balls of hormones and impulsivity, how do we deal with them?” Within a year, Ana launched the SMPD’s Parent Project, a voluntary intensive 10-week support group for teen parents. The program addresses critical yet common issues. A practical six-point plan is taught, and mental health referrals and case management are assigned when needed. So far, nine sessions have been completed, and 81 parents have graduated. Due to the program’s success, plans are underway to expand to a similar course for parents of elementary-aged students.

With years of youth ministry roots, Ana never thought God would call her to the ministry for police officers, which has become a key role in her work. “My youth ministry heroes and sheroes taught me the idea that God is wherever we are, and ministry is wherever God is leading us to,” Ana says. She credits where she is in her career to DVULI and shares, “At NC2, systems thinking spoke to my soul. It helped me make the decision to attend grad school and to study policy.” Her JPD plan, deemed a Georgetown Certified Diversion Model, was based on a paper she wrote back in grad school. “It is largely what I learned in DVULI that focused my sights on JDP and all of the system work we are doing here locally.”

Ana’s beloved Santa Monica, named after the patron saint who prayed for her wayward son, was known for her patience, gentleness, and kindness. Ana leans on the same fruits of the Spirit as she prayerfully serves troubled youth in the wake of the riots. Her work marks the beginning of unprecedented truth and reconciliation between the city’s youth and police departmental norms, bringing hope to all.