All I Want for Christmas, Is You?

► Half the country disagrees with you… strongly.

The year 2020 brought into sharp focus the viral ferocity that divides the US on an assortment of life and death subjects. Systemic racism, pandemic mask-wearing, presidential politics, and prolonged uncertainty around the election results are just a few of the most obvious

The social media echo chamber reinforced our convictions and demonized those who disagreed with us. Whatever beliefs we fashioned could be justified and were justified by pundits, pollsters, prophets, and profits.

In our Christian tradition, preachers on the left and right contorted Scripture with “Thus saith the Lord” proclamations in unwavering defense of their political preferences. Sermons were preached, books published, intercessions made, sacred assemblies convened, and laments cried. Viral YouTube prophesies both attacked and defended whatever your point of view. Perhaps as a youth worker, your tweets, comments, or captions contributed to the chaos?

Now, just weeks after the most divisive election in our collective memory, we prepare to commemorate Christ’s birth at family tables that could include—COVID permitting—otherwise beloved relatives who passionately believe the polar opposite of us. We will likely share the Eucharist with divided congregations and certainly with a divided body of Christ.

Political disagreements are not new. Even Christ’s birth was met with genocide from an egomaniacal king who felt politically threatened by the baby born in a Bethlehem barn.

The genius of America is a governmental system designed to function despite political factions. But the present level of disagreement has mired our government in an embarrassing state of dysfunction. Some leaders have devolved into partisan hacks who demonstrate only how to scream past each other while fomenting rage among their base. Worse, they have wedged brother against brother, neighbor against neighbor, donkeys against elephants, red against blue.

People are dying from the stalemate. Literally—over 300,000 from COVID-19 alone—and figuratively as Jesus condemned in the Sermon on the Mount:

In the midst of all this, what might Christmas offer that can help us manifest, “Peace on earth, goodwill toward men”? Even though right now, there are instances where people can’t stomach those who voted differently than us (let alone embrace joyfully), remember that our youth are still watching. What might the Prince of Peace say about our current Christmas calamities? 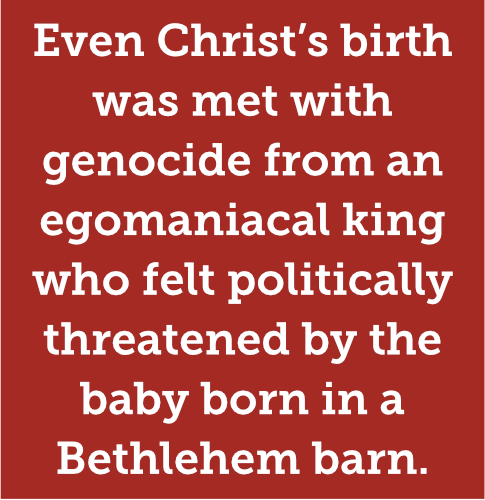 First, stop. Stop demonizing, condemning, and confusing as enemies those who disagree with your politics. Even if you have actual enemies, stop striving to defeat them. Try this instead: “Love your enemies, bless those who curse you, do good to those who hate you, and pray for those who spitefully use you and persecute you” (Matt. 5:44 NKJV).

Second, listen. Listen to the people with whom you disagree politically. Listen, not as a tactic to ultimately win the argument or to feign agreement, but because you want to rediscover their humanity and to relearn how to empathize despite disagreement.

Third, repent. Repent even if you didn’t mean any harm. Repent even when you had no idea that your ignorance might hurt someone. Repent on behalf of social sins you may not have directly caused but from which you directly or indirectly benefit.

Fourth, release. Release the need to be right all of the time. Release the power that holds you tightly. Release whatever privilege you guard so fiercely.

If this sounds idealistic, meditate on Paul’s Christmas reflections:

“Is there any encouragement from belonging to Christ? Any comfort from his love? Any fellowship together in the Spirit? Are your hearts tender and compassionate? Then make me truly happy by agreeing wholeheartedly with each other, loving one another, and working together with one mind and purpose. Don’t be selfish; don’t try to impress others. Be humble, thinking of others as better than yourselves. Don’t look out only for your own interests, but take an interest in others, too. You must have the same attitude that Christ Jesus had. Though he was God, he did not think of equality with God as something to cling to. Instead, he gave up his divine privileges; he took the humble position of a slave and was born as a human being. When he appeared in human form, he humbled himself in obedience to God and died a criminal’s death on a cross” (Phil. 2:1-8 NLT).

Humility goes a long way in Christ’s kingdom economy. It’s the antidote to the hubris that fuels disconnection. It’s the “same attitude” mandate Christ requires of us, especially at times like these when our youth are looking to us to help make sense out of nonsense. It’s the key to fostering fellowship, cultivating tenderness and compassion, finding agreement, and working together. It inoculates against selfishness and prefers the interests of others. It relinquishes privilege and serves without expectation.

Humility just might be the Christmas vaccine our viral dysfunctions demand.