A Backlash from the Pious

► Race Relations as a Youth Worker

This July, Christians on social media condemned me as a “traitor to the Christian faith” for supporting Black Lives Matter. Some were people I’ve known for years. Most had never met me but piled on the criticism anyway. According to them, I had betrayed Jesus to promote “God-hating Marxists” bent on “destroying the family.”

My supposedly traitorous offense: pointing out a prominent evangelical’s inconsistency on damaging property when it aligns with his political beliefs on the Black Lives Matter movement. He had praised a “Jesus Matters” shouting woman for vandalizing three BLM murals in New York after previously lambasting BLM because some looters, masquerading as protestors, had vandalized private property.

Some of the critics also pointed to the organization I lead, Thrive Collective’s collaboration in painting the historic BLM mural next to the courthouses in lower Manhattan. Thrive’s Juneteenth “Statement in Support of Racial Justice and Black Lives Matter,” together with my participation as both a marcher and speaker at numerous prayer protests this summer sealed my fate.

Though unsurprising, the venom speaks volumes about the state of race relations within the American church in 2020. It also illustrates why so many Christians have become cultural caricatures at a time when the Christ we claim to follow offers clear guidance on an appropriate response to systemic racism. Both point to a unique opportunity for emerging generations of young people and youth workers who disciple them to lead the church to genuine repentance and transformational social change.

In the Western Hemisphere, this 500-year tradition began with Christopher Columbus and included European conquest and colonialism. Added to the list are:

The existence of legal systems that stubbornly perpetuates race-based injustic in the US is objective, historical facts—not matters of opinion. Opinions differ over how and whether to right the wrongs.

Second clarification, “Black Lives Matter” means the movement to eradicate systemic racism everywhere it exists, not the political organization. The hashtag #blacklivesmatter went viral after a neighborhood watch volunteer with a legal gun permit (not a cop) killed Trayvon Martin for eating Skittles while wearing a hoodie in Florida. The killer was subsequently found not guilty by a jury of his peers based on an antiquated “Stand Your Ground” law on July 13, 2013. This acquittal happened seven years ago, not the 1800s or 1950s.

This specific racist act was the current tipping point in a uniquely American legal history that devalues people of color generally and black people specifically. The statement “Black Lives Matter” became a call to action that still reverberates today. Along the way, a broad spectrum of people with different political, religious, and other distinctions have embraced it. Some created far left political organizations that exploit the phrase and attempt to conflate racial justice with other issues. This  is not a defense of those politics.

As youth workers discipling young people, the work of racial justice is grounded in Scripture and demands a response. Looking to Jesus’s example, here are three principles that can guide us today:

1. Repentance. Jesus aggressively and repeatedly condemned racial injustice by politically powerful and religious Jews toward Samaritans and demanded repentance. Samaritans descended from Assyrian soldiers, who centuries earlier had conquered Israel, destroyed the capital city of Samaria, and taken many as slaves. When the exiles returned, they found living in their homes, the offspring of soldiers who had raped the women left behind. They called them “Samaritans.” Jews hated their very existence because of the injustice it embodied. More than once, Jesus rebuked His own disciples for prejudice toward Samaritans and elevated their status.

He even commanded the Jewish lawyer to become like the Samaritan who showed mercy to the beaten and bloodied Jew by the side of the road if he wanted to experience eternal life.

The ways Jesus championed Samaritans should reflect how we champion racially oppressed people living among us. How does your youth group welcome Arab teens wearing the hijab or stand with the black boy who was stopped and frisked last night? To do so effectively requires first confronting the cultural prejudices and implicit biases that shape how we perceive them. What prejudices require repentance in you and the communities you serve? 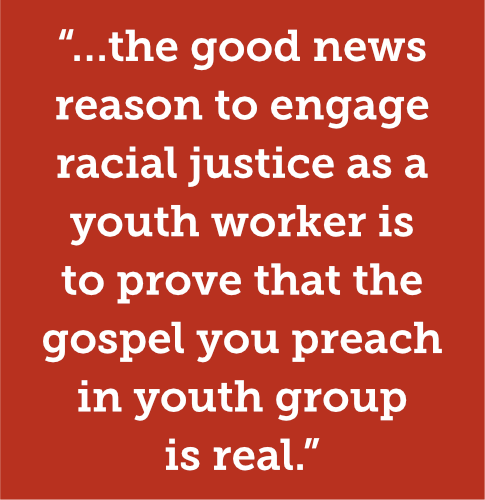 2. Solidarity. Jesus, the creator of humankind, voluntarily chose a life acquainted with suffering when He became flesh and blood to live among us. His birth was unseemly (unwed mothers were capital criminals), unsanitary (barnyard birth), controversial (astrologers perceived it from stars), lowly (shepherds—not innkeepers—understood), politically radioactive (Jesus was “king” of occupied people), deadly (the king slaughtered innocents in response), and religiously offensive (“Messiah”). This solidarity compelled Jesus to respond to the oppressed with compassion. He intimately knew the pain and brokenness of those He came to serve—their anger and frustrations—and met them on their terms. He didn’t try to talk them out of their experience. Instead, He validated them as seen and known and heard and loved. Then He demonstrated His love for them by laying down His own life for theirs.

Youth workers, how are you living in solidarity with those who have been victimized by racial injustice? For example, have you enrolled your children at the private Christian school while ignoring the under-funded, struggling public school that the migrant Mexican students all attend? What are you willing to sacrifice to restore justice (e.g., access to tutors and music programs) on their behalf?

3. Prove it. Jesus described the gospel as good news that makes the world around us demonstrably better. “The Spirit of the Lord is on me,” He says in Luke 4, “because he has anointed me to proclaim good news to the poor. He has sent me to proclaim freedom for the prisoners and recovery of sight for the blind, to set the oppressed free, to proclaim the year of the Lord’s favor.”

The good news Jesus offered wasn’t conversions and baptisms, even though His followers did those things. He never reduced his message to an insurance policy against hell. Instead, He promised deliverance from poverty (economic justice), freedom for prisoners (criminal justice), blind eyes that could see (healthcare justice), freedom for the oppressed (social justice), and Jubilee justice (the “year of the Lord’s favor”) for all. Systemic racism robs our youth, and the world, of these very things.

To that end, the good news reason to engage racial justice as a youth worker is to prove that the gospel you preach in youth group is real. Not just elusively “relevant.” We’re clearly not there yet. But the gospel says it’s possible if and when we count the cost and make it so. After Jesus read that passage in His home synagogue, He scandalized the congregation before returning to His seat. “Today this scripture is fulfilled in your hearing,” He promised.

They responded by trying to drop Him off an 800-foot cliff. In the face of hopelessness and despair, if you dare to believe that your very presence can demonstrate good news, prepare for a backlash from the pious. This is the real cost of gospel living. People who need good news will love you, but the deacon board just may try to throw you off a building. Or call you a traitor on Facebook.